Only The Earnest Show Up In The Rain

Outdoor events get rained out. That is an inevitable consequence of holding an event outside.

The Society of Automotive Engineers (SAE) had been staging an annual car show for a couple of years. One year I decided to go big with a display tent filled with several restored cars, I and my team had built.

Well, it rained. Not a sprinkle. Not a shower. It downpoured. The SAE organizers determined to hold the show in spite of the weather. The volunteers dubbed their raincoats and boots. They looked like a crew of “Gorton Fishermen”.

So I am standing under my tent, lamenting the cost and time. A wasted Saturday. Wasted time cleaning, detailing and preparing all these collector cars for the show. Approaching is a Gorton fisherman, attired in the boots and raincoat, plus an umbrella. He looks like a man with a mission. I am expecting to be informed the show has been canceled. It turns out he is not an SAE show volunteer. But he was on a fishing expedition.

I welcomed him under the cover of the tent. He introduced himself, “Hello there, my name is Bob Affleck” in a strong British accent. We engaged each in a lively conversation about old cars and the art of restoring them. After a while, Mr. Affleck asked, “Have you ever heard of an HRG?” I answered “Yes”. In fact, I had recently been reading about them. Mr. Affleck followed with “Well it would seem you are the man for the job”.

Bob Affleck was the owner of a rare 1938 HRG coupe. How rare? The only coupe they ever built. And so began my journey restoring a prototype which never saw production.

My lesson for the day: When it rains at an outdoor car show, you won’t be busy but the car crazy, totally sold out Gear Heads / Petrol Heads will show. Only the earnest in heart shows up. 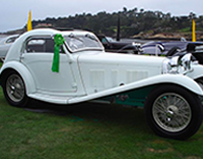 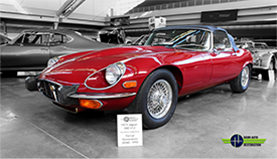 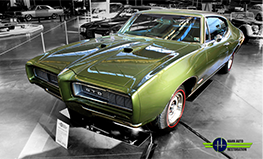 Dear Bill, Richard shared the letter you sent with me, and I just wanted to thank you for your thoughtfulness. It meant a great deal to him, believe me. Next came the photo book which actually brought tears to my
Read More

Your crew is impressive.

I cannot believe the marvelous gift. The clarity and views have not only a craftsmanship quality but those of a creative artist. I cannot thank you enough. Nancy and I can not express our appreciation- except to say thank you.

You have really done miracles with the body. I had no idea that it had taken the beating it had over the years and in all that racing. Many thanks and my best to the guys.

I am the owner of a 1966 GTO, which I purchased with the intention of having it restored to its original condition. In 1994, I delivered the car to Palermo Auto Body Shop for the purpose of having the restoration
Read More

Dear Bill Now that I have had a chance to show my car since you completed last summer’s restoration project, I wanted to take this opportunity to thank you for a job exceptionally well done! At every cruise or show
Read More

This letter of recommendation will discuss my relationship with Bill Hahn regarding his car restoration capabilities. I have thrown away all my files and have to rely on my memory, so no dates can be provided and details will be
Read More

Thanks gents- Loved seeing the car and your great work.

Thanks to all the staff for attentive service.

Thank you again for bringing the family heirlooms back to life.

To the wonder workers of great vintage automobiles. Few groups uncapable of accomplishing a near miracle from off load day in late august 2002 to the transactions of the group in the past few days. I am most grateful and
Read More

I am happy to report that I got my first Jr. Award at the Annual Grand National show held in Dover,Delaware. Once again I want to thank both of you for the wonderful paint job and hope to see at
Read More

Willian R, Hahn is an outstanding automobile restoration expert. The first project that he did for was a total restoration of my 1966 Dodge 426 Hemi convertible. The project started in 1980 and concluded in early 1983. Shortly thereafter, I
Read More

William R. Hahn did a complete restoration of my 1957 Ford Thunderbird. I consider his workmanship and knowledge of authentic restoration to outstanding. He is a perfectionist in his work. I was very pleased with the final result and received
Read More

I was introduced to Bill Hahn in the spring of 1996 when I visited Palermo Auto Body in Wexford, Pennsylvania, to discuss some work I wanted to have done on my 1971 Pontiac GTO. Shortly thereafter I took the GTO
Read More

I am very please and excited to see the progress that has been made over the past few weeks, and also the care and quality that you are putting into the work. Again, many thanks for your help and kindness.

I have been working with the auto restoration shop of Hahn and Woodward in Harmony,PA, a small rural town in western PA. Bill Hahn is the principal on my 300 SL Roadster, 1957. Another so-called restorer had worked for three
Read More

Thanks to you and all of your team who worked on the car. As you know, the care means a lot to me, and I sincerely appreciate your working so hard to make it right. Thank you

Top of the class in restoration

Great attention to detail in their restorations!

Bill and all the guys at the shop are amazing people, and amazing craftsman!!